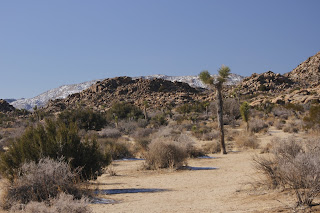 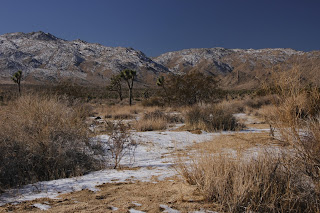 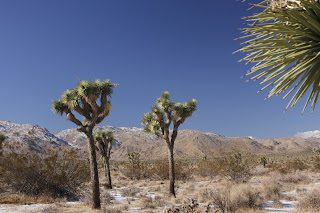 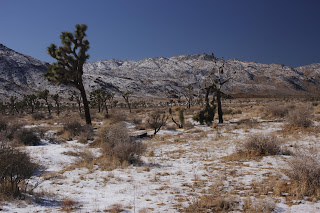 I was going to head up Deep Canyon and drive to Pinyon Flats, since a friend posted they had new snow up there, but when I went out to buy gasoline yesterday morning, I saw ALL the snow on the San Bernardino mountains and some up at Joshua Tree national park.  Hubby took the day off yesterday (I still have this week off school for winter break), so we decided to head up there.  There was a light dusting of snow in the park and on the higher peaks, as well as on many of the rocks in the park.  I doubt it will last until the weekend, but who knows?  We drove out to Keys View.  I REFUSED to get out of the car, since it was so cold and the wind was blowing.  Hubby got out, took a couple of photos, and was nearly knocked over by the wind!  I stayed in the car with the heater running!  It was a good day to visit the park and I'll be posting more photos tomorrow.
Posted by desertsandbeyond at 5:12 AM

I was up there yesterday frolicking in the snow with my camera! Some friends from Temecula came out specifically to shoot pics and we got a huge bonus when we began driving through snow!! It was awesome, wasn't it?
I will be in PD Friday afternoon. Wanna get together?