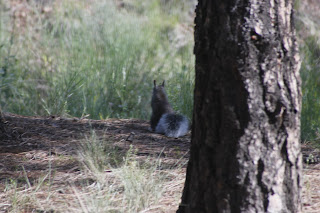 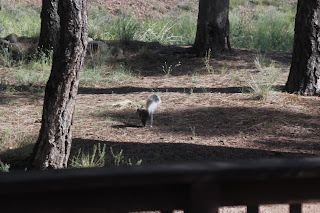 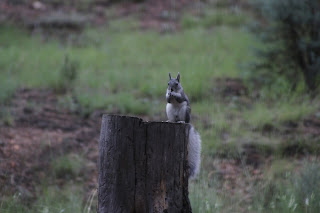 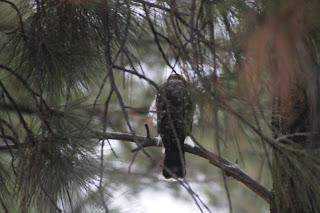 So, the story of the hawks and the squirrel continues (see previous posts).  One afternoon, I took a nap, only to wake up to hubby stating, "If you want to save that squirrel, you BETTER get out here NOW!"  I stumbled out of the bedroom and looked outside.  That CRAZY squirrel was out in the open, on top of a stump, eating some "critter food" which I had very foolishly left there.  And, guess who was perched right up in the tree across from the stump?  TWO of the hawks! (I only got a photo of one of them...).  I mean, they both had that squirrel in their line of flight and sight.  She was completely oblivious of them...or was she?  Does nature provide IDIOT squirrels with some kind of defense?  She had used her nose to find the critter food...would her nose alert her to the hawks?  Would she hear them fly over her as they swooped down?  I really didn't wish to find out, so I ran outside screaming and waving my arms.  The two hawks took off and so did Madam Squirrel.  Only, she stuck her foolish head out and came back to scavenge for more food.  I was beside myself...Here was this beautiful, young squirrel, certainly easy prey for the hawks and I could do nothing to save her.  But, did she have some kind of internal defense?  Was her hearing acute enough to hear the hawks leave the tree and swoop down?  I don't know.  I do know that one morning I took my reading book outside to read on the back porch.  A crow flew right overhead and, for the first time ever, I hear the "flap, flap, flap , flap" of its wings.  I mean, I HEARD it.  Then, two of them flew right by the end of the porch and I heard both of them...I HAVE heard an owl fly by and my hearing is no way near that of a prey animal.  Also, it is a well known fact that predators don't always get a meal...lions don't.  Leopards don't.  Cheetahs don't.  I'm hoping that Cooper's hawks don't always get a meal, too, and that Madam Squirrel lives to put peanuts into the ground for the coming winter.  I don't know how this tale ends as we left the next morning...Nature Notes for August 25, 2011. To see other Nature Notes, please go to:  http://ramblingwoods.com/
Posted by desertsandbeyond at 8:20 PM

I doubt the squirrel is as oblivious as it seems. Her hearing should be acute enough to warn her of an approaching hawk, but if she's quick enough if another question.
Does it only look that way or does she have a white tail?

Hopefully, she isn't as dumb as she looks, and will escape those hawk. If not, well, maybe some other squirrel will learn by her example.

Although I dearly love the Abert squirrels it's just part of the cycle of life even if difficult to watch.

You're so funny! I can just see you running outside, screaming and waving your arms. How DOES nature get along without you? Ha ha! You remind me of myself. Once a bluejay came and stole a robin's eggs from her nest in our backyard. I screamed and cried trying to stop the bluejay, but, alas, he/she got away with the eggs. Survival of the fittest, I guess!

So the squirrel lives on to eat more of your bird food. Maybe the Hawks had other plans for dinner. Great photos.

Fun post about the perils of the prey. I love hawks but they hunt in my yard too and I worry about the wildlife I've grown attached to that are prey.

I didn't think a coopers could take a squirrel..maybe a large female? Yes, everyone has to eat..hard to watch but a great look into nature..