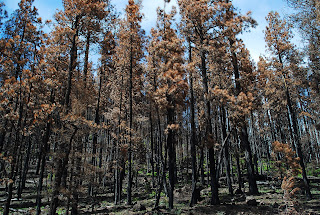 Yesterday hubby and I drove down by Alpine, Arizona, scene of this July's massive Wallow fire.  We had previously been to Alpine and Hannigan Meadows and Springerville back in 2000, when I first bought my Honda Accord.  We enjoyed seeing all the lush forests and green meadows.  This trip, however, was depressing.  Much of the area off the highway down to Hannigan Meadows had been burned.  Tall, stark, black trees lined the road.  There was a road crew working to remove dead trees and debris and as I sat there waiting for the road to open up again, I wondered, "Why are people so darn STUPID?"  If I remember correctly, both the Rodeo and Chedeski fires were human-caused...one by a motorist who was stranded, the other by an arsonist.  These two fires then merged to become Arizona's largest wildfire...that is, until this July's Wallow fire.  We saw so many beautiful animals yesterday~gray squirrels, chipmunks, elk, deer, eagles, osprey...what happens to their homes after a fire?  How do little chipmunks outrun one?  It just boggles my mind even thinking about that.  Most (nearly ALL) of the forest roads were closed, due to the fire.  Hubby even saw one cabin which was burned.  All that was left was the fireplace...so sad.  Someone lived there~that was someone's HOME.  As I sit here this morning, in our rented cabin for the week, I hear the cries of a Cooper's hawk.  What would become of its home, its territory?  I'm sharing a photo this morning and I hope that it isn't too depressing...while fire IS a natural part of a forest, certainly HUMAN caused ones are another story. Nature Notes for August 18, 2011. ** The cause of the Wallow fire is currently under investigation, but it is believed to be human-caused.*** To read other Nature Notes, please go to:  http://ramblingwoods.com/
Posted by desertsandbeyond at 6:14 AM

I feel your pain and anger. It makes me angry for all the irresponsible people who are careless. If it is one thing I can do to make you feel better, Mt. Lemmon after our massive Aspen Fire in Tucson is coming back to life. I remember driving up the mountain after the fire to check out my friend's cabin and saw all the dead trees hovering over the road....it was really depressing. Today, while those older trees are gone, newer ones are taking their place. It just is sad to see what we know and enjoy burn. Life does go on...