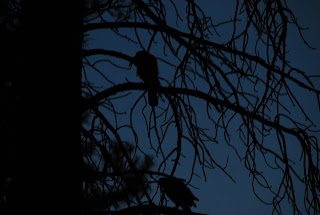 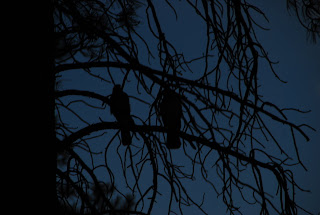 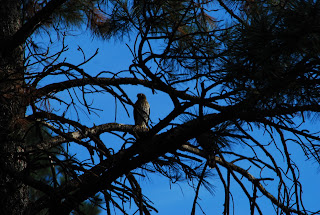 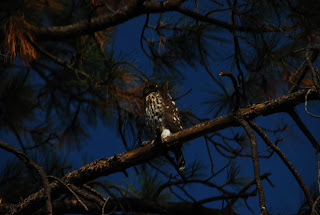 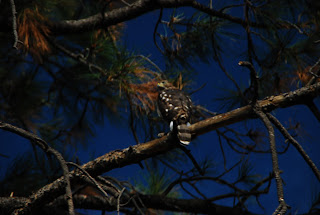 When I awoke that first morning, I heard a screeching call over and over and over.  It was very high pitched and was coming from right across the wash behind the cabin.  It wasn't completely light yet (that's why the photos are so dark).  I followed the noise and found two hawks in a nearby pine tree.  A third was below them.  It was a mother and her two "youngsters".  As an animal observer and photographer, I stood and studied them.  It was very interesting over the next 4 days for me to watch their interactions and their actions with their prey.  Later that morning, the three of them took off across the street (I presume to find their breakfast...).  Mom came back and so did one of the youngsters, but the other one didn't.  She called and called all morning and was silent for a couple of hours.  When she started up again in the afternoon, I had to go out and see what was going on because her cries were quite pitched.  The "missing" young one had returned and had "lunch"...some kind of rodent!  And, he wouldn't share it!  They were up and she was calling every morning as soon as it started to get light, which was 5:30 a.m.  They all took off in the morning to find breakfast and returned soon thereafter.  They were out there in the afternoons, too.  I'm glad I got to observe and watch them.  It was sad to leave them.  One afternoon, two of them were up in "their" tree (they did claim one tree as their own...) and the beautiful squirrel that lived around the cabin area was out hunting for food.  I had fallen asleep and hubby called to me, "You better get out here.  That squirrel you've been watching is about to become supper for the hawks!"  I ran out and yup...two of them were up in a nearby tree and were triangulating on the squirrel.  It was completely oblivious.  Fortunately, she managed to survive.  The hawks flew off to find an easier meal. Outdoor Wednesday for August 24, 2011. Please go to http://asoutherndaydreamer.blogspot.com/ to see other participants in Outdoor Wednesday.
Posted by desertsandbeyond at 5:16 PM

Great observations and photos. And I really like your Mogollon Rim photo!!

It's so much fun to be able to just sit and observe birds and animals? I'm glad that you had this wonderful chance to learn a little more about how Cooper's hawks live their lives.