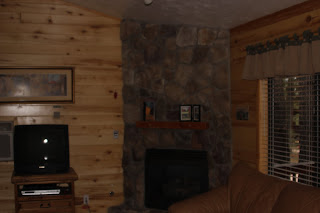 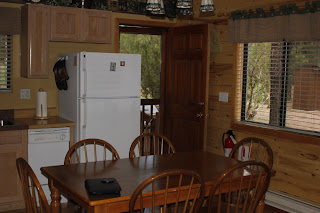 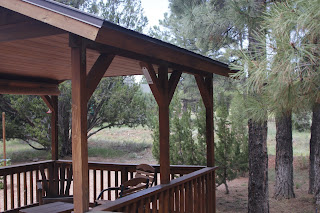 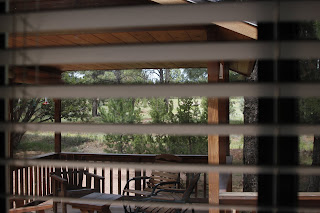 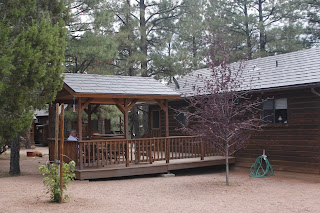 Hubby and I rented a cabin up on the Mogollon Rim, in Overgaard, for 3 nights (4th night "free").  We had discovered these cabins back in 2000, on our first trip to the rim.  At that time, we were staying at another cabin in Forest Lakes.  These are across the highway (Highway 260) from the Bison Ranch, with stores and western fascades.  We stopped by these cabins over the Memorial Day weekend and rented one of them, the "Coffee Plantation".  This was a 2 bedroom cabin with beautiful aspen wood on the inside.  It had a big back porch and a BBQ (all the cabins have a BBQ).  Some even have outdoor spas, but we opted to rent one without a spa.  Some also have lofts, but since it was just the two of us, we chose this one at the back.  We tried to get out daughter and SIL to come with us, or our son and his girlfriend, but none of them could get the time off work. So,  we had the cabin all to ourselves (except for the rabbits, squirrels, woodpeckers and hawks!)  I immediately discovered a family of Cooper's hawks that lived right out back of the cabin and I'll be telling their story later. Since it came with a full kitchen, we had stopped at Whole Foods and AJ's down in Scottsdale and purchased steak, baking potatoes, coffee, and other items for the week.
Posted by desertsandbeyond at 5:30 AM

Looks beautiful inside. I love renting places out. Plus yummy food from AJ's...nice:) Hope it was restful.

THis place is adorable.

That's my favorite kind of vacation. You find a lovely place and you just rest and enjoy for a few days. I can't wait to hear about the Cooper's hawks.