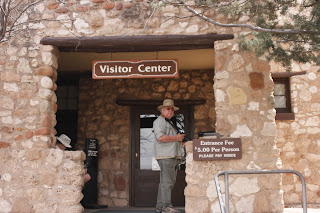 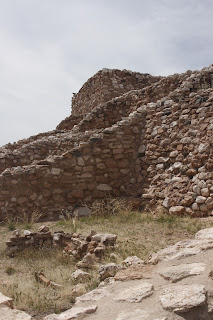 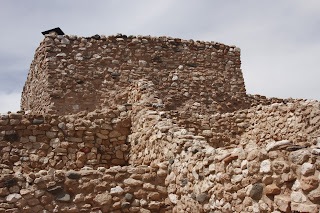 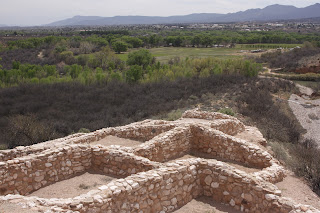 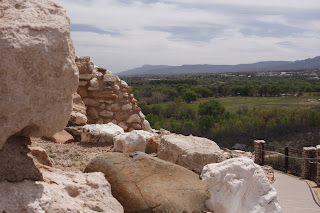 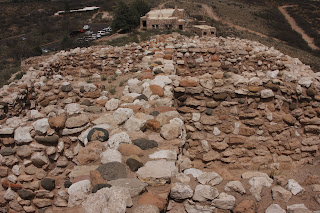 We drove through Cottonwood, AZ today and then out to the Tizigoot ruins.  We had never stopped there before and we had no idea what to expect.  At this site, however, you can actually walk up to the ruins and even go through an opening to the rooftop viewing platform!  HA!  Me and my sore knee actually made it up to the roof!  (...happy dance...) Coming down was a...er...dilemna, however, and I had to hang on to the rail CAREFULLY!  But, the views of the Verde valley were spectacular!  The Indians had a prolific water source in the Verde River and had flat land to farm 360 degrees around them.  They also had a wonderful view of the surrounding areas and would have been able to see other tribes coming.  It was interesting and informative to stop here and I'm glad we stopped there, even though it was extremely windy and hubby's hat blew off twice!
Posted by desertsandbeyond at 7:56 PM

We really loved that whole area when we were there a couple years ago. We've been there twice, and really would like to go back. Rode the Verde Valley Rail Road, and that was fun. Don't forget to drive up to Jerome, on the hill. Great fun! Thanks for sharing.

I loved that view from Tizigoot and could easily imagine the Sinagua's farm fields below. Really like that third shot. Almost like the prow of a ship.

I love the Verde Valley...beautiful. I bet it was a sight to see at such a height. Gorgeous!

Great photos and wonderful views. Looks like quite a hike!