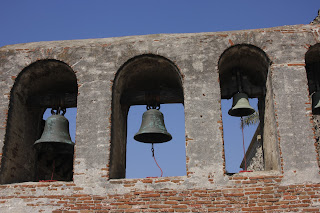 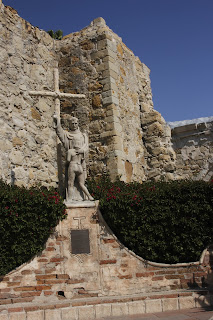 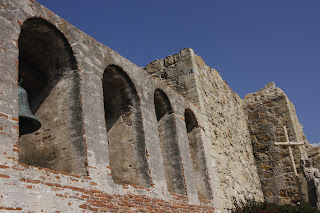 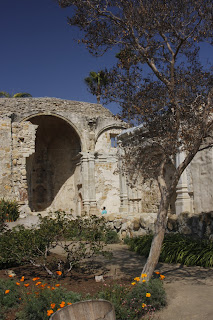 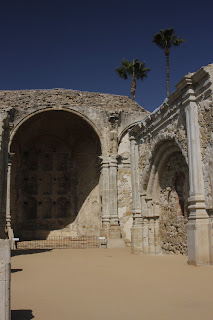 Once you go past the vast mission compound, be sure to stop by the ruins of the old church.  In an earthquake of 1812, the church was demolished and 40 people were killed. It was estimated to be about a 6.9 earthquake. The church building was only 6 years old when the earthquake hit.  As you can see, the church wasn't ever rebuilt.  The ruins are fascinating.  I found fossils among the rocks which were used to build it. The mission was left in ruins from 1812-1910 when Father John O'Sullivan restored it.  The only building still left was the chapel, which had been used for storing hay.  Father O'Sullivan worked by himself, restoring many of the buildings, and finally, in 1918, got permission to make it an active church. He rebuilt some of the mission himself and restored his health (he was suffering from tuberculosis).  Isn't that fascinating?  I simply cannot believe that this mission was neglected for many years and left in ruins. Really, this stuff is more interesting than fiction.  Can't you just see Father O'Sullivan working out there on the mission, by himself? He was actually the first priest there since 1886.  Reconstruction of the mission walls continues to this day and I'll post more on that later.  It has such a fascinating history, I can't wait to return!  Honestly, one of the reasons why I enjoy this mission so much is that is isn't whitewashed and you CAN see the original walls...I hope they retain its old charm.
Posted by desertsandbeyond at 7:27 PM

This is great--It is so neat to see old ruins and just imagine what was.

I visited here last August and took loads of photos. It was just beautiful.