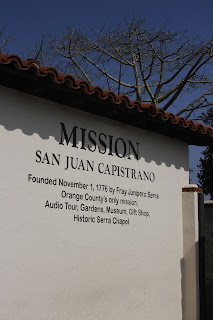 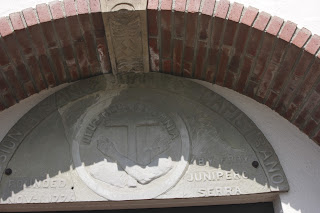 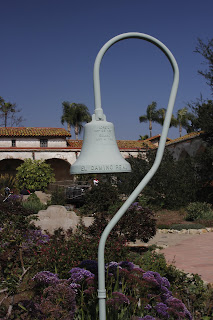 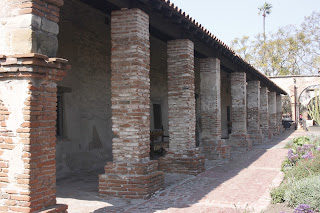 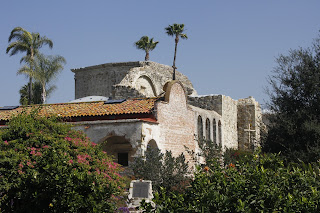 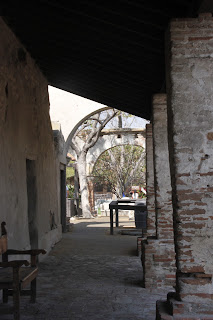 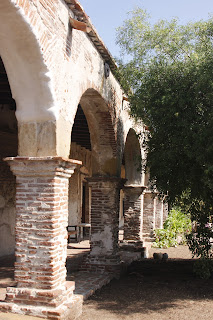 It had been over 20 years since I last visited the old mission San Juan Capistrano.  Our kids were about 10 years old at the time (they are in their 30's now).  I dragged them to every mission in Southern California, much to their annoyance!  If you are going to visit any one mission, this would be the one.  Not only is it beautiful (the grounds are well kept), but it also has a real sense of peace.  Father Serra's chapel is located here.  It survived the great earthquake of 1812 which took down the main church.  It is the only mission which is located in Orange County.  If you would like to see a map of the California missions, you can follow this link:   http://missiontour.org/  It was so different spending the weekend near the coast, since the desert has had clear blue skies and near 80 degree temperatures!  I'm always intrigued by the fog which rolls in and doesn't burn off until about 8:30 a.m.  I grew up in the suburbs of Los Angeles and it's good to return to that environment every now and then.  Hubby even remarked that he'd like to visit more missions this summer, so I guess we'll be doing that.  I'll be posting more pics of the mission this week.  Our World Tuesday for February 28, 2012.
Posted by desertsandbeyond at 7:21 PM

i like the mission bell shaped light fixture (i'm assuming that's what it is). very cool. great stonework.

It's been at least as long since we've visited the CA missions -- would love to go back sometime. So many places..... I'll look forward t your further posts.

That part about the fog has always interested me as well. It's so different from the areas we live in....it's kind of a nice change for a bit. I've never been to the mission but I've wanted to go to see the birds during their nesting period. I've heard it's quite special. Beautiful building. The beach and a well kept mission with beautiful grounds...sounds like paradise!

Hi you have beautiful compositions, and like you I also don't photoshop because i am ignorant in following computer instructions. haha! But your header is super awesome!

Live close by, but still haven't visited yet! Inviting pics!

Did my comment go thru?
Okay, here it goes again -maybe because I'm Dutch I'm so in love with the sea and the mountains in Calif. that I still haven't visited the missions yet! Have lived here for 20+ years:)

You are teasing me....This mission is on my list of 'must sees' if I ever get to CA. Thanks for the link as well.

I grew up in Compton and lived my working life mostly in the Pomona area. Now I live in the cool land of Coastal BC and the Pacific Northwest, but still have the ocean nearby. - Margy

There's something so serene and peaceful in the old missions. I saw this one maybe 60 years ago and then moved away. Wish I could see it again.