Internet is now running and I'm BACK!

Phew!  It's been a hectic two weeks.  I had back to school night, I was sick with bronchitis (already), and we had MAJOR Internet issues.  We've had two techs out, but the problem seems to be that Time Warner is PUNISHING customers who dropped their cable, but kept their high-speed (HA!) Internet.  We've had two techs out in two weeks because we kept getting dropped while using our Internet.  Then, it slowed down to a C-R-A-W-L.  Remember the first computers that came out years ago...Yup...THAT SLOW!  Finally, yesterday afternoon, hubby did some troubleshooting on his own and VOILA!  Everything is now running like it should.  Seems the last tech forgot to tell hubby the final step in rebooting the entire system.  And, YES, we think he did it on purpose.  PPPPFFFFFTTTTTTTT to Time Warner!

Anyway, it's good to be back.

This school year is going to be a difficult one because, out of 28 kids, 19 of them are below basic or FAR below basic.  I have 5 kids who don't even know the letter sounds.  Did you know that smile begins with an "l"?  Well, I didn't know that either...sigh...I'm going to have to work with my low, low, low group on intensive phonics and keep the above-average kids busy!  HOW in tarnation does a kid get into third grade without knowing his or her beginning letter sounds?  My grandson, who is 4, already knows those sounds...It is going to be a L-O-N-G school year!

I went up to the horse ranch last weekend, but nobody was there.  The owners were away at a horse show.  I did let out a couple of my horses (individually) in the arena for some R&R.  They are always happy to get some play weed-eating time!  Here are some photos from the ranch last weekend.  That's my big gelding, Sunni, and then Lucille, my half Tennessee Walker, half draft mare that I bought from the ranch owner when the other boarder defaulted on her board.  Neither one of us wanted Lucille to end up in a bad place, so I bought her.  She's WONDERFULLY calm and I have ridden her twice now.  And, she's gaited!   :-)  She is a real doll! 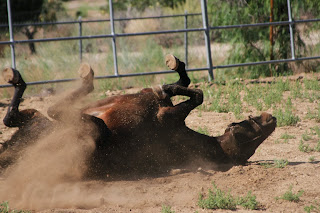 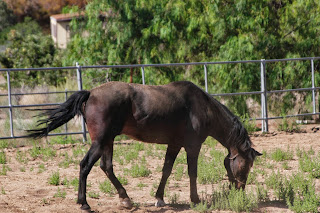 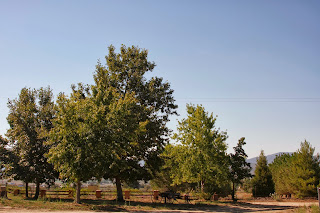 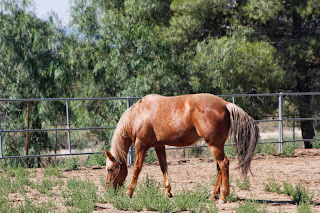 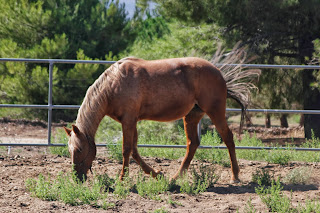 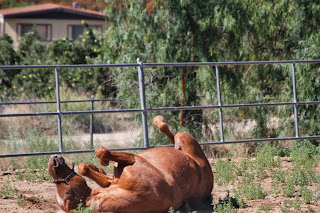 Posted by desertsandbeyond at 5:33 AM