Had a few visitors yesterday

It all started at 5:30 a.m., right after I put some birdseed with corn kernels out on the porch railing.  I looked out and saw something large and brown moving around.  At first I thought it was a bobcat because of the coloration, but then I saw its snout.  It was a coyote.  The coyote was eating all the corn!  It was too dark to get any photos and it quickly moved on (thank goodness).  There are two large neighborhood dogs near here and they come visiting to our doorstep every morning.  Then a woodpecker showed up.  I finally got some photos of it that afternoon.  Then, my little squirrel friend appeared.  He/she is out there now going through the birdseed.  I already threw out about 15 peanuts for the blue jays, and they were gone in less than 5 minutes!  The raccoon even showed up last night about 8 p.m. while we were watching TV.  She just saunters up onto the porch and scavenges for whatever the birds leave behind.  I was kind of surprised to see her because all the other cabins are occupied down below and there were a few people outside.

This morning, the blue jays are out, the squirrels are out, and the woodpecker has come and gone.  And, yes, the neighborhood dog came by for her morning scratch and some lovin'.  She's a very friendly dog and we saw her here last summer, too.

Anyway, here are some photos of our new-found friends. 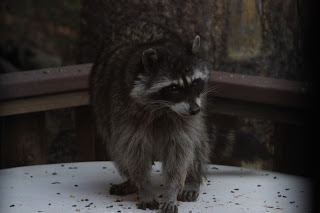 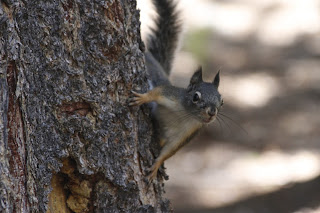 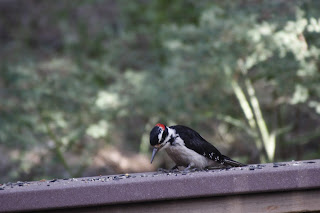 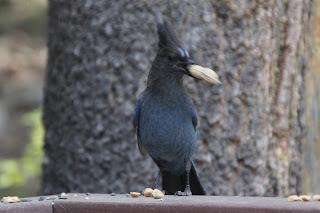 Posted by desertsandbeyond at 7:19 AM