Forest around the cabin

We spent 8 nights at a rented cabin in the forest between June Lake and Silver Lake, on the eastern Sierra Nevada.  It was very restful up there.  However, it was windy each day. But, the daytime temps were in the mid 60's and it was down into the mid 40's every night, which is a drastic change from the 100+ degree days here in the desert and our nights of 80 degrees!  We sure had to bundle up, too, which was nice for a change!  Our cabin was the last one and it backed up to the forest and a sheer cliff, from which I believe, a raccoon made her nightly visits to our cabin.  Hubby heard her for a couple of nights and then she revealed herself to us on the third.  She had very good manners and was never aggressive toward us, but would show up thereafter each night right after hubby cooked dinner on the BBQ!  We saw a deer one afternoon and I spotted a coyote very early one morning.  Of course, we had the usual squirrels and blue jays, and even a woodpecker came to visit.  It was so relaxing up there that a couple of days we just stayed in the cabin and opened up the door and all the windows and listened to the sounds of the forest.  I find it very quiet here in the desert now and I miss the calls of the blue jays.  On the morning we left, a crow invaded their territory and they were sure upset about that and a couple of them chased the crow away! 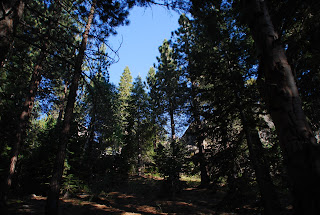 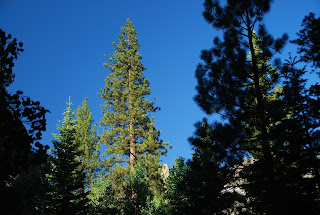 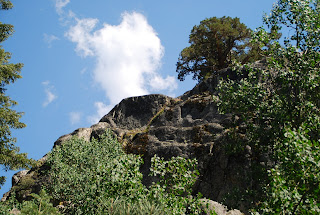 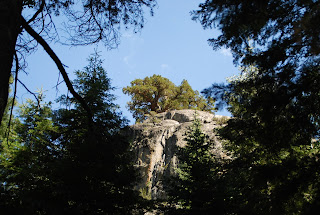 Posted by desertsandbeyond at 5:03 AM