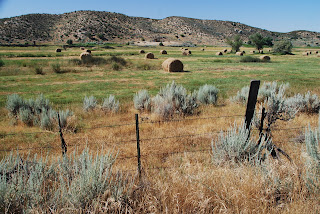 Yesterday I took a friend with me up to our local mountains and valleys. I wanted to show her these large rolls of hay. Farmers in California don't usually do this. Instead, they bale their hay using a baler. But, these bales were on Indian land near Aguanga and it was for their cattle. Other huge bales were stored nearby, ready for next winter when the grass might be covered with snow. I was so surprised to see them that I had to stop and take some photos. I didn't intentionally shoot these pics in thirds, but this one ended up that way! Sunday Stills Challenge for July 25, 2010.
Posted by desertsandbeyond at 5:34 AM

Great picture but I'd also like to point out that your header is a perfect example of the rule of thirds, too! LOL

It's hay time! yes, I like your header too, for this challenge, and the background with the coyote, I think.

Great picture. Interesting how hay is baled different depending on what part of the country you are in.