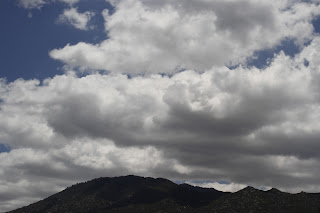 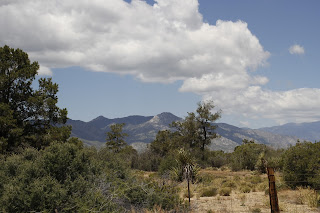 Monsoon season seems to be arriving earlier and earlier each year.  We rarely had it during June.  Now it is quite typical.  It used to be just July and August...hmmm....global warming?

Anyway, for the last 3 days we've had monsoon clouds and downpours.  I actually took these photos a couple of weeks ago.  I hit some sprinkles out on the freeway yesterday as I was driving to north Indio, to babysit the 8 week old grandson while his sister and parents went to swim lessons at the Palm Desert pool.  They didn't want to take him along with them, out in the heat.  I don't blame them.  It was 114 here yesterday and more of the same for today.  I'm guessing that thunderheads will once again appear over our mountains in the afternoon.

Ugh.  It's one thing to have the HEAT, but when you throw in humidity, it just wears me out!
Posted by desertsandbeyond at 7:21 AM