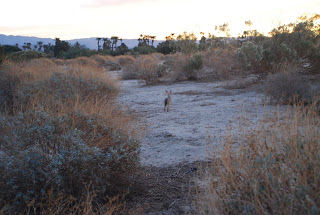 As I went for my morning walk yesterday (hubby was sleeping in), I counted 10 jackrabbits and cottontails and 1 unidentified hawk. There is one jackrabbit who is quite "people friendly". I had to shoosh him away yesterday! He just wouldn't move (a BAD habit for a prey animal!) and I'm concerned that he will become "coyote meat"! The jackrabbits have HUGE ears (to help them during the summer and get rid of their body heat) and they are HUGE!!! The cottontails have a little white "cottonball" tail and are much smaller and swifter. Speaking of coyotes, while I was on my walk, a fire truck went down the nearby street and 3 coyotes howled to answer the siren! They were up in the palms above where I was walking. I never did see them, but they were close. People walk their dogs frequently up there and coyotes in our desert, in Palm Springs, have been known to attack and drag off small dogs, but the only ones I've seen have been lab-sized dogs or larger, so they should be safe, but still...I wouldn't take my dog up there! And, especially off-leash, like some dog owners do!
Posted by desertsandbeyond at 5:45 AM

I take my dog with me on my runs in the desert, but I always worry about other people having their dogs off leash!!!