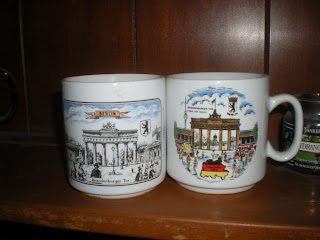 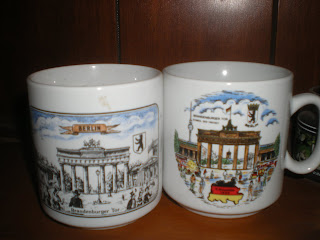 When our son (and daughter) graduated from college, their aunt paid for each of them to travel to France for a month and stay with her. Our daughter stayed only in France, but our son took his long-time friend (since kindergarten), Aaron, with him. The two boys stayed with Aunt Cathie for a week in southern France, then took the train to Florence and visited the city. Then, they spent several days in Munich, near the great Beer Hall...THAT's a whole other story! Then they took the train to Amsterdam and finally Berlin, then back to Paris. Along the way, they stopped at the Brandenberg Gate and Checkpoint Charlie and our son brought me back two coffee mugs. Unfortunately, at the airport, he lost his art prints from Italy, but the two coffee mugs did make it home! I am so thankful that they had this wonderful opportunity and I will be forever grateful to my sister-in-law!
Posted by desertsandbeyond at 4:59 AM

what a great trip, and experience, for you daughter and son! I want to go to Europe some day too!

what a great trip, and experience