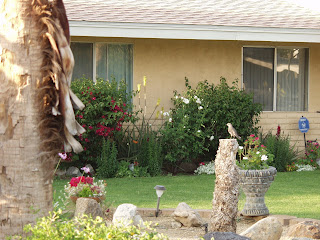 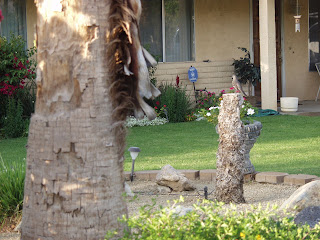 So, as I completed my walk around my neighborhood the other afternoon, I saw this mockingbird land on a tree stump in a neighbor's yard. This used to be a huge pine tree, but, like others here, it probably got an infection and had to be removed. We have one out back that is slowly dying and someday we'll have to take it out. Anyway, Mr. Mockingbird landed on the stump and I SLOWLY approached him and got some pics! Here they are!
I LOVE the mockingbirds in our area. One family built a nest out front, in one of the palm trees across the street. They would swoop down at our cats if they got too close to their nest. I've rescued a couple of baby mockingbirds in the last 30 years. One I took to the Living Desert as it was too young to fly. Another one, my white cat Loki, had cornered out in the front yard. The little guy spread his wings at me, trying to intimidate me, as I grabbed Loki and put him in the house. Apparently he got back to the nest. The parents were quite upset, but I think he made it. He was a fiesty little thing! The birds seem to set up their territories and defend them quite agressively. Unfortunately, the crows and roadrunners seem to make more of a dent on the baby bird population than any of my cats. I've seen crows fly off with baby birds and while it hurts to see this, they DO have to feed their own families! And, our roadrunner family isn't afraid of my petite cat, Daisy, who they delight in chasing down the street! She only weighs 5 pounds and is very tiny, so she's an easy target for them, even though she's probably the one killing their babies! Sometimes I find baby birds in her "dead pile" out in the garage!
Posted by desertsandbeyond at 5:30 AM